We say military spending is killing us. Here’s why: 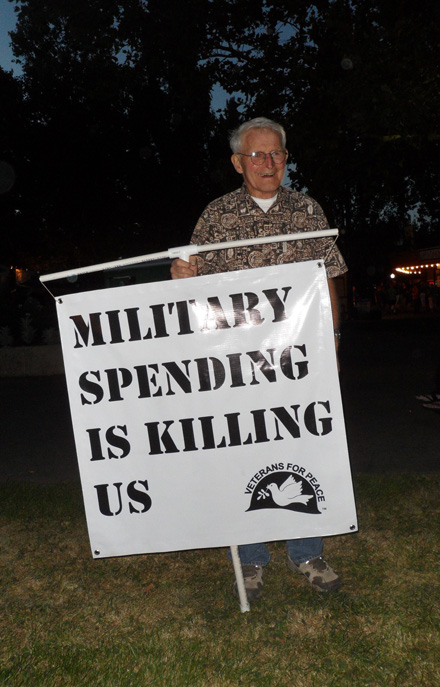 This site will give you all the figures for all the military, weapons systems and foreign aid expenditures broken down into what is paid by which state, county, city. Spend a bit of time on it. www.nationalpriorities.org 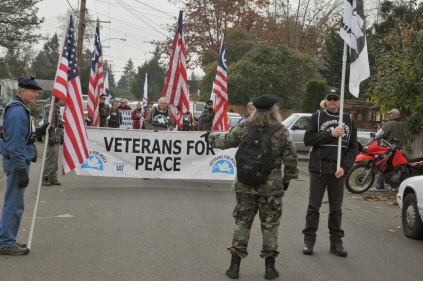 Spokane Public Schools District 81 Board Meeting
We gave this response to the Spokane School Board’s decision to arm guards in our schools:

Painfully acquainted with the use and misuse of weapons, Spokane Veterans for Peace strongly opposes the introduction of more weapons into our schools. Weapons endanger our children, not protect them, and have a track record of turning simple arguments and accidents into heartbreaking tragedy. More convincingly than any curricula, the employment of firearms in Spokane schools teach students to value violence as a means to an end and have no place in civilized society, let alone our student bodies.

Even with one-third of our country’s public schools using armed security, there are no studies to show that arming school officials makes those schools safer. In fact, two of the deadliest school shootings in our history took place on campuses with armed guards (Columbine H.S. and Virginia Tech). It should also be noted that a troubled student at our own Lewis and Clark High School was able to manipulate police officers into shooting him because they had no unarmed response to his self-destructive cry for help.

We urge that our highly valued education system not surrender to fear, despair and the gun lobby without considering the capacity of students and staff to rise above the clamor for more guns and more violence. 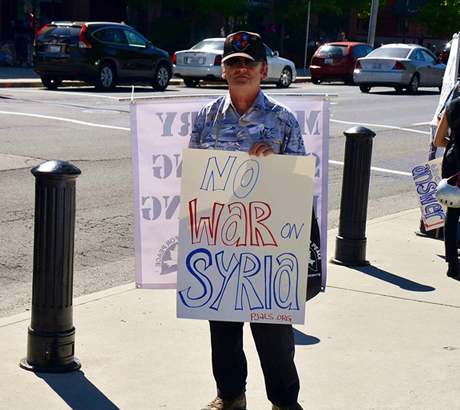 “Grace and Me: A Forbidden Tale of War”

This video was produced by VFP 035 member Larry Shook about his personal experiences with PTSD, war, and healing.

To see more of what we have done, check out our Where we work page as well as Photo galleries of the many events where our VFP chapter has had a presence and an impact.

VFP 35 contributed $200.00 dollars to the restitution of this memorial:

Restoration Of The My Lai Mural by Mike Hastie

During a recent trip back to Vietnam with Brian Willson, Becky Luening and Sandy Kelson ( March 28-April 22, 2016 ), I spent two days at the My Lai Massacre site in Quang Ngai. The very large mosaic-tile mural in the photo ( with Sandy and Brian ), depicts some of the 504 Vietnamese civilians murdered by American soldiers on March 16, 1968, in the last moments of their lives.

While examining the mural up close, we noticed the artwork had badly deteriorated from years of severe hot and wet weather that causes such damage. I had a private conversation with the co-director of the museum. She had worked at the memorial site for 16 years. I told her I was a Vietnam veteran, and a member of Veterans For Peace, and that millions of Americans who were adamantly against the war, consider the My Lai Massacre site extremely important. I said to her that as far as I was concerned, the My Lai Massacre site is sacred ground, and one of the most important memorials in the world. After I said this, she broke down and cried. It was a very powerful moment for both of us. I felt a deep emotional connection to her, and a loving empathy that was so important in healing my soul.

When I got back to my home in Portland, Oregon, I corresponded with her via email, and offered to raise the funds needed to restore the mural. She eventually replied that it would cost $4,200 to complete the restoration. Our goal is to raise this money soon so that the mural may be completely repaired by the 50th anniversary of the massacre on March 16, 2018. Some of us plan on returning to Vietnam for this important event. To contribute to this project, please make checks out to VFP Chapter 72, and mail to: