VFP35 joins in celebrating the acceptance of the 2017 Nobel Peace Prize as part of Washington Physicians for Social Responsibility, a member of ICAN, the International Campaign to Abolish Nuclear Weapons. 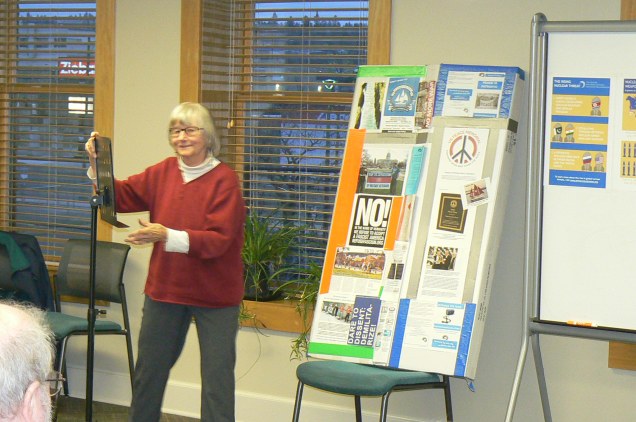 During the month of November: Mike Hastie with a photo exhibit here in Spokane. 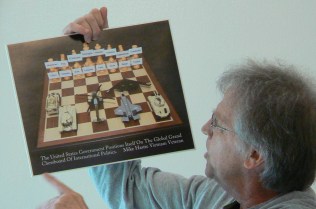 On November 29th, 2015, Spokane VFP was out supporting the Global Climate Change Rally. The evidence points to increasing disruptions in the climate as a cause for future strife, with water shortages, refugees and other causes of war only increasing. We must tell our governments to act today. Poster displayed below.

Spokane VFP on November the 7th, 2015 at the Auburn Veterans Day Parade.

The following is a letter in the Spokesman Review by our President, Rusty:

Peace is the vets’ friend

Declining the local frenzy to honor random participants in military violence this November, Spokane Veterans for Peace will join embattled peacemakers making a rare statement of reason in Auburn’s excessive Veterans Day Parade.
Spokane hails former Secretary of State Condoleezza Rice, mistress of pre-emptive war and senseless torture, as a patriotic paragon. Eastern Washington University football tastelessly touts things military regardless of sacrifices or crimes. Bobby Brett inexplicably apologizes to military mavens for the childish behavior of young athletes with meager reason to respect our national anthem. He should apologize to the singer instead of exposing these youngsters to some of the few Americans we encourage to be more violent than hockey players. Amid a decade-long federal effort to glorify our pathetic bloodbath in Vietnam, Hanford nuke-builders will be honored for winning, instead of fueling, the Cold War.
War has no winners, and veterans have no better friends than those who demand peace.
Rusty Nelson
Rockford 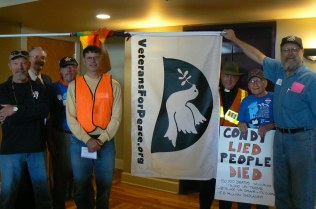 On August 5th-9th, 2025, Spokane VFP sent two members to the VFP national convention. Much was learned, and even a few Vet Lit books were sold. 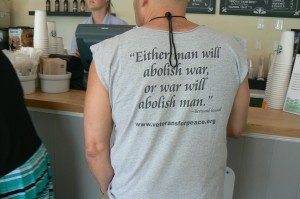 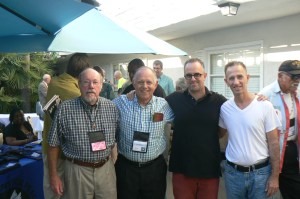 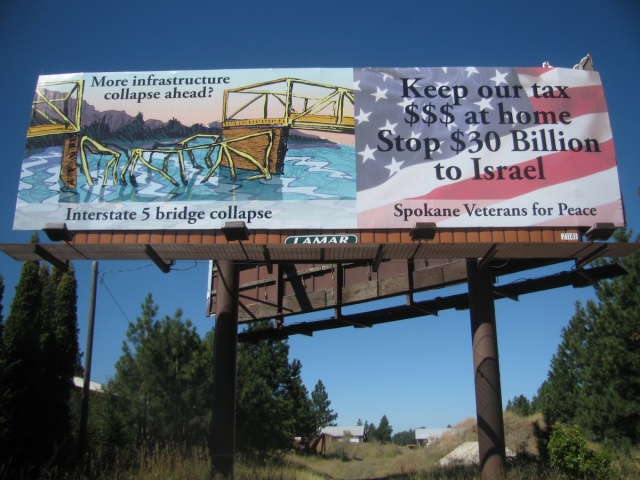 Spokane Veterans for Peace, Chapter 35, has funded the placement of a 14′ x 48′ billboard facing westbound on I-90, between Cour d Alene and Post Falls, Idaho, urging that we “Stop $30 Billion to Israel.” This board was made possible not only by the work of the Spokane Vets for Peace, but also by a matching grant provided by the Coalition to Stop $30 Billion to Israel.

There are additional grants available. TAKE ‘EM UP ON IT, FOLKS! https://www.facebook.com/pages/Coalition-to-Stop-30-Billion-to-Israel/212583259093

Stop $30 Billion has helped place dozens of similar billboards across the country, many of them sponsored by local Veterans for Peace chapters.

Israel is the largest recipient of American aid in the world, larger than all other recipients combined. We note, too, that funding for Israel has substantially increased in the face of the sequester that has devastated social programs and infrastructure spending domestically.

While social programs and infrastructure in the United States, across the board, are being devastated by the sequester cuts, AIPAC (American Israel Political Action Committee) successfully lobbied Congress to INCREASE aid to Israel, not to include it in the sequester cuts. The U.S. will give Israel an additional $200 million dollars during this fiscal year, on top of the $10 billion already slated.

American aid to Israel is given in cash at the start of each fiscal year.  The only stipulation imposed on Israel’s use of this cash gift is that it spend 74 per cent to purchase U.S. military goods and services.

Spokane Vets for Peace views our $30 billion funding for Israel as both unnecessary and counterproductive to the aims of 1) peace in the Middle East and 2) filling domestic needs.

Keith Kopp, top, and Eugene Kravchuk, installers for Lamar Outdoor Advertising, unroll a new billboard sign 45 feet in the air along Interstate 90 near the Pleasant View Road exit in Post Falls on Tuesday.

Contrasting views on America’s relationship with Israel have unfurled along an 8-mile section of Interstate 90 in North Idaho.

A billboard in Coeur d’Alene criticizing U.S. military aid to Israel prompted a second billboard to go up Tuesday in Post Falls celebrating the alliance.

Foreign policy feels out of place on this stretch of freeway, where advertisements normally highlight pickup trucks, lottery jackpots and tribal casinos.

The first billboard, which suggests the money would be better spent at home, also is upsetting to some in the area’s Jewish community, in part because it went up right before the Jewish holidays Rosh Hashana and Yom Kippur.

That billboard west of the Northwest Boulevard exit in Coeur d’Alene is sponsored by Spokane Veterans for Peace with a matching grant from the Coalition to Stop $30 Billion to Israel, which opposes Israeli settlements in East Jerusalem and the West Bank.

The sign states, “Keep our tax $$$ at home. Stop $30 billion to Israel,” and depicts the section of the Interstate 5 Skagit River bridge that collapsed in May. “More infrastructure collapse ahead?” the billboard asks.

Critics say that message is misleading and absurd.

The billboard is meant to spur discussion of how much the United States gives Israel to build up its armed forces and whether the aid fuels further violence in the Middle East, said Rusty Nelson, president of Spokane Veterans for Peace.

“We’re told over and over again that the money that our government can spend is very limited, but we continue to shell out the big bucks to Israel,” Nelson said. The money “would be better used to prepare for peace at home instead of prepare another country for waging war, especially in the Middle East,” he said.

Spokane Coalition for Israel and an international Israel education organization, StandWithUs, together purchased billboard space just east of Pleasant View Road in Post Falls. That sign states, “America & Israel. Shared Values – Defending Freedom,” and it depicts the U.S. and Israeli flags as well as an American soldier and an Israeli soldier embracing their children.

StandWithUs has paid for similar billboards across the country in response to advertising funded by Stop $30 Billion to Israel, which refers to a pledge the Bush administration made to provide $30 billion in payments to Israel over 10 years starting in 2008. Israel is required to spend almost three-quarters of the money on U.S.-made military equipment.

“They’ve made this sound as if this is breaking the U.S. budget, when it’s a small part of the overall military and financial aid foreign budget,” said Rob Jacobs, the Pacific Northwest director of StandWithUs.

Dueling billboards is not the best medium for deliberating foreign policy, Jacobs added.

“We would prefer not to be in a debate using billboards and bus ads,” he said. “We don’t think it’s a proper forum for any serious debate, and the use of slogans and hyperbole only results in people disliking, hating, vilifying the target of these ads without a real understanding of the context or the full situation.”

He and Barenti also question why Veterans for Peace singles out aid to Israel when other countries, including Egypt and Jordan, also receive billions of dollars in U.S. aid.

It’s a “dog whistle” strategy, intending a deeper meaning that touches on anti-Jewish sentiments, Barenti said. “It runs on these very old anti-Semitic tropes of Jews working behind the scenes controlling things to get their way to other people’s detriment,” he said.

Nelson responded to the criticism.

“We get called anti-Semitic or worse, and our complaint is not against the Israeli people or the Jewish people, but simply the Israeli government and the unlimited leash that they have to run on with our money and our military supplies, which we are so generous with,” he said.

They target Israel, he added, because the U.S. has a tradition of forgiving Israel’s debts on top of the foreign aid.

“Israel is the country that we lend and give the most aid to, and it is all military aid,” Nelson said. “We would not complain about giving material aid to help small business people and that sort of thing in Israel.”

As for where they put up their billboard, Nelson said that simply was the spot that was available and which fit their budget.

Both billboards were purchased for monthlong runs but could be extended.

This article was revised to correct where Israeli settlements are located. Israel withdrew its settlements from the Gaza Strip in 2005.
Get more news and information at Spokesman.com